Here is something I learned a while back from Mr. Snover himself, and it was something I just couldn’t believe. Sure enough it’s true, and it’s still true in PowerShell Core 6. The “Get-” part of almost all “Get-” commands is completely optional. Yeah – you heard that right. “Get” is optional for almost all. Get-Process can’t run correctly, mainly because “Process” expects some arguments. Otherwise, give it a try!

I am putting this out there so the next person doesn’t have to spend the DAYS I wasted trying to fix this. Here is the story:

You want to install SMA on your brand new Windows 2016 Server, but obviously need Windows Azure Pack. Grab the web installer, fire it up, verify that you have the right pre-reqs, and pick the Windows Azure Pack Express and Admin API selection. The install goes fine, and a web page will launch so you can configure Azure Pack. You enter your database info, user and passphrase info, and ‘next’ your way to the end. You press that last checkmark and expect all of the little circles to come back green……but then you see that the Admin Authentication Site has come back with an error:

“500 Internal Server Error – Failed to configure databases and services: Some or all identity references could not be translated.”

Long story short – Go to your inetpub directory, and pull up the properties on the folder named “MgmtSvc-WindowsAuthSite”. Un-check the Read-Only box at the bottom, apply, and when prompted tell it apply to all sub-items.

From what I can tell – the connection strings and users you entered during the config are entered into the webconfig for this site. My guess is that the setup program is attempting to decrypt the webconfig and create additional files (an un-encrypted version of the webconfig?) but was failing due to the read-only property. I can’t verify that (I refuse to go through that setup program again), but I do know that unchecking that box finally got the config to complete successfully, I was able to finally launch the Service Management Portal, and get my SMA web service registered.

The literal days I wasted on this – I hope none of you have to go through that.

Here’s a quick one – you want to update the failover management servers on your agents en-mass, and don’t want to wait 12 years for it to complete. Why do you want to set it? Maybe you only want certain agents talking to certain data-centers, or specific management servers have very limited resources. Regardless of the reasons, if you do need to update the agent config, it can be a bit slow. Here is a quick little script that can make those update a LOT quicker.

First thing first – download PoshRSJob from Boe Prox. It’s about the best thing since sliced bread, and I use it constantly. Download the module and place it in one of your module directories (C:\Windows\System32\WindowsPowerShell\v1.0\Modules, for example). Next, create a CSV called FailOverPairs.csv. This should have 2 columns – Primary and Failover. For example:

Let’s examine some of this – the imports are obvious. If you have any issue with unblocking files or execution policy, leave a comment and I will help you through the import. The next line is different:

What we are doing here is to get a list of the loaded modules, then exclude some of them. We are doing this because when we run this script, we are creating a ton of Runspaces. By default, these runspaces will need to know which modules to load. We don’t need them to load PoshRSJob, and we don’t need them to load things like the ISE because they are ephemeral – they will go away after they have completed their processing. This line can be modified if you don’t need to load other modules. It will load the OperationsManager module, which is the heavy lifter of this script.

Next, we get all of the agents from the management group. This script needs to be run from a SCOM server, but you could easily modify this script to run from a non-SCOM system by adding the “-computername” switch to the get-scomagent command. Then we import the CSV that contains our failover pairs.

Now the fun starts – this line starts the magic:

This is the magic. We are feeding the list of SCOM agents (via the pipeline) to the start-rsjob cmdlet. The “-name” parameter tells the runspaces to use the Agent name as the job name, and the “-Throttle” parameter is set to control the number of runspaces we want running at once. I typically find that there isn’t a lot of benefit to going much over 2 or 3 times the number of logical cores. Maybe if you have remote processes that were very long running it might be beneficial to go up to 5-10 times the number of processors, but for this I found 2-3 to be the sweet spot. You will also see that we are telling start-rsjob what modules to import (see above).

The rest of the script is the scriptblock we want PoshRSJob to run. This is actually pretty straight forward – we set some variables (some of the we have to get with “$using:“). Then we find the current primary and failover, see if they match our pairs, and if they don’t we correct them. This isn’t a fast process, but if you are doing 20 of them at a time, it goes by a lot faster!

At the end of the script, we are simply waiting for the jobs to finish. In fact, if you want to track the progress, comment out this line:

If you comment that line out, you can track how fast your jobs are completing by using this:

We’ve been able to check several thousand systems daily in very little time to make sure our primary and failover pairs are set correctly. I hope you guys get some use from this, and go give Boe some love for his awesome module! Leave a comment if you have any questions, or hit me up on Twitter.

PowerShell Core 6.0 was released yesterday! This is a huge step forward for PowerShell as it becomes an even stronger cross-platform powerhouse. In addition to the public announcement, Jeffery Snover and the PowerShell team did an AMA!
Here’s a quick primer:
Get it here.

What does this new PowerShell look like? I grabbed the MSI (will do posts on Linux and MacOS later!) and took the defaults: 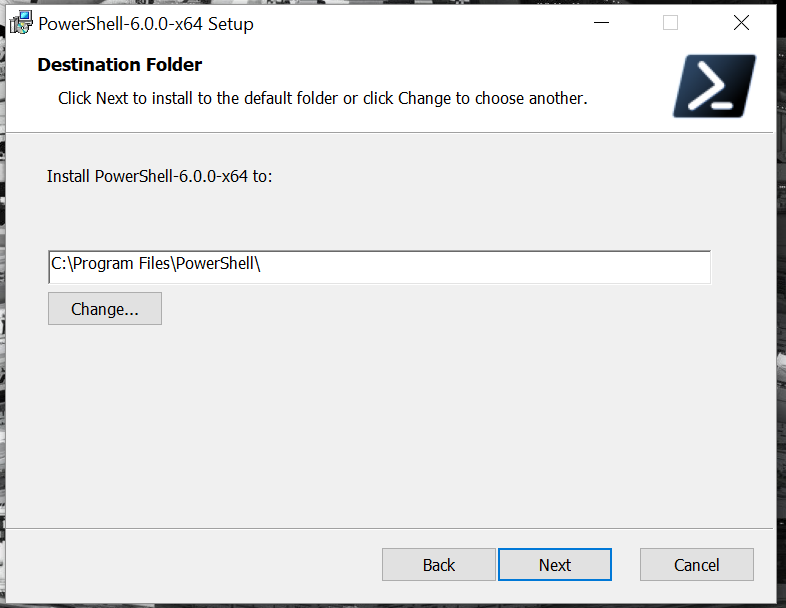 Super easy. Now you can launch a console window from the start menu, but if you browse to your install directory from a command line you get your first surprise! 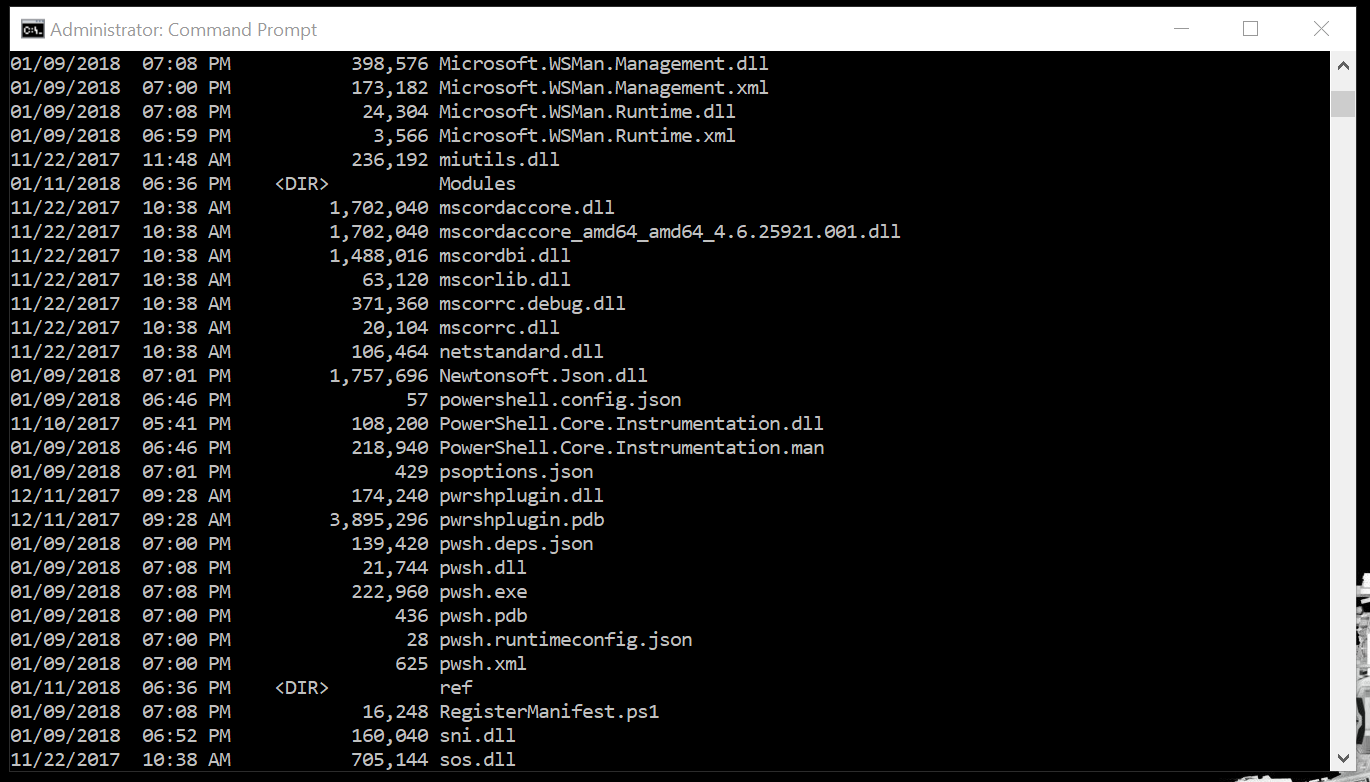 If you have read my blog before, you know I like my customized prompt and profile. Core has a profile just like Windows PowerShell – located here on a typical Windows machine: \Documents\PowerShell\Microsoft.PowerShell_profile.ps1 Time to make Core feel like home again: 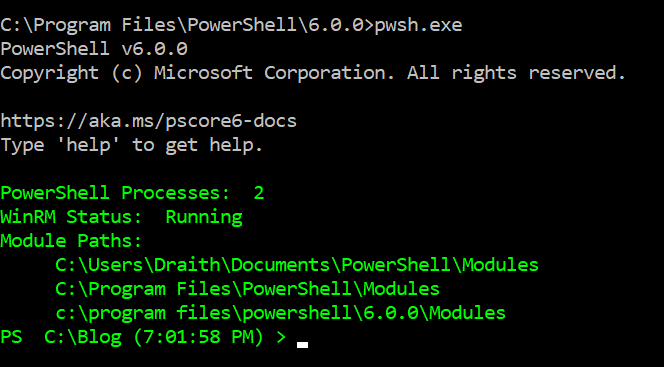 Yep – that’s better. There is a ton of fun stuff to do now – cross platform remote scripting is going to be a focus on some upcoming posts. Stay tuned!

Back in September, Microsoft announced the new B-series of Azure virtual machines. In a nutshell, these are cheap VMs that are great for workloads that normally run little to no CPU utilization, but at times have “burst” workloads that consume more CPU. When the VM is running idle, a bank of credits is accumulated. When the VM needs to really use the CPUs, credits are consumed. Here is a quick glance of the sizes: 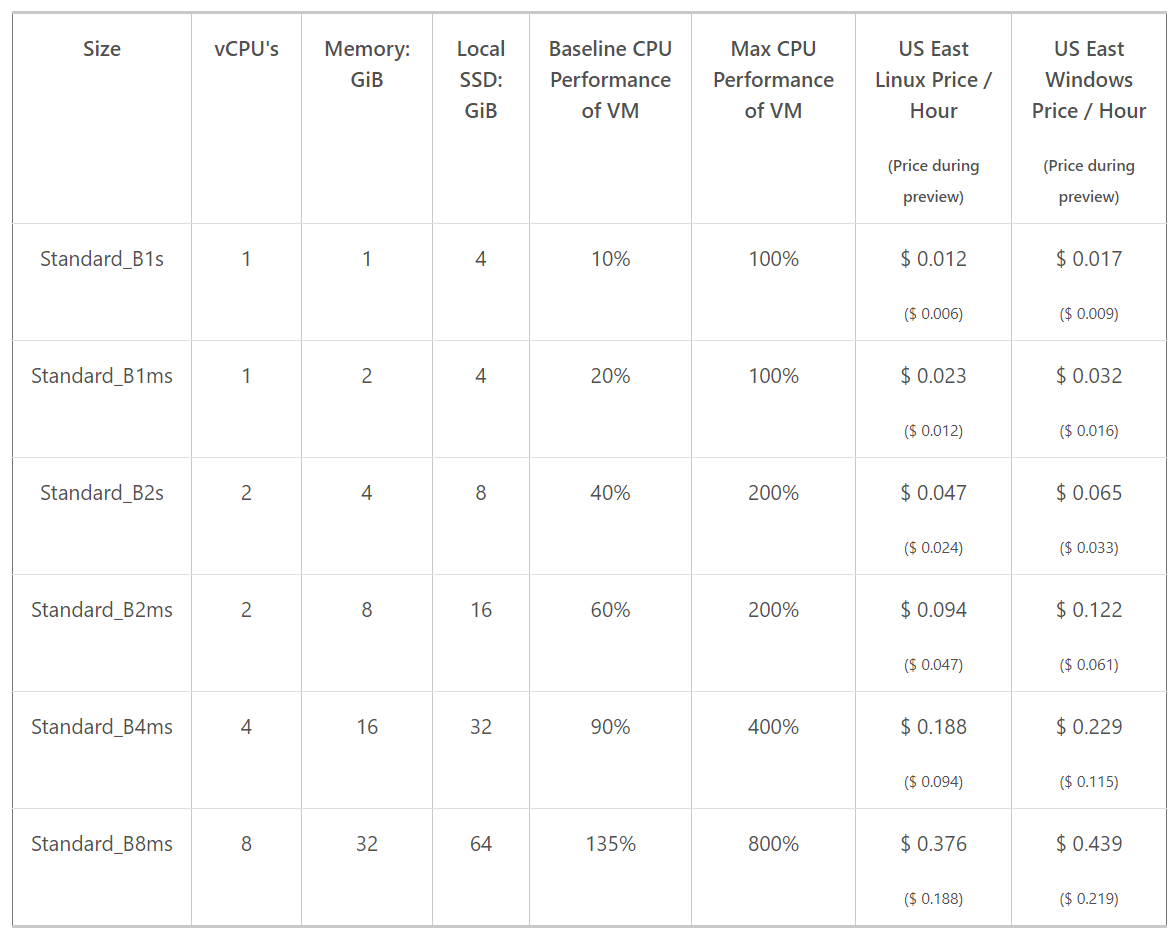 While getting my demos ready for an upcoming presentation at ExpertsLiveUS I had a thought. Why on Earth am I concerning myself with the cpu/ram on my demo laptop, when I can have a fully setup demo environment running in Azure? The B-series allows me to run with little cost, as they sit idle most of the time. When I am actually preparing or doing the demo, I get all the CPU I need! Combine that with AutoShutdown, and my costs are amazingly low. Setting up is really easy. Simply start to create your VM as normal, selecting one of the follow B-series VMs: 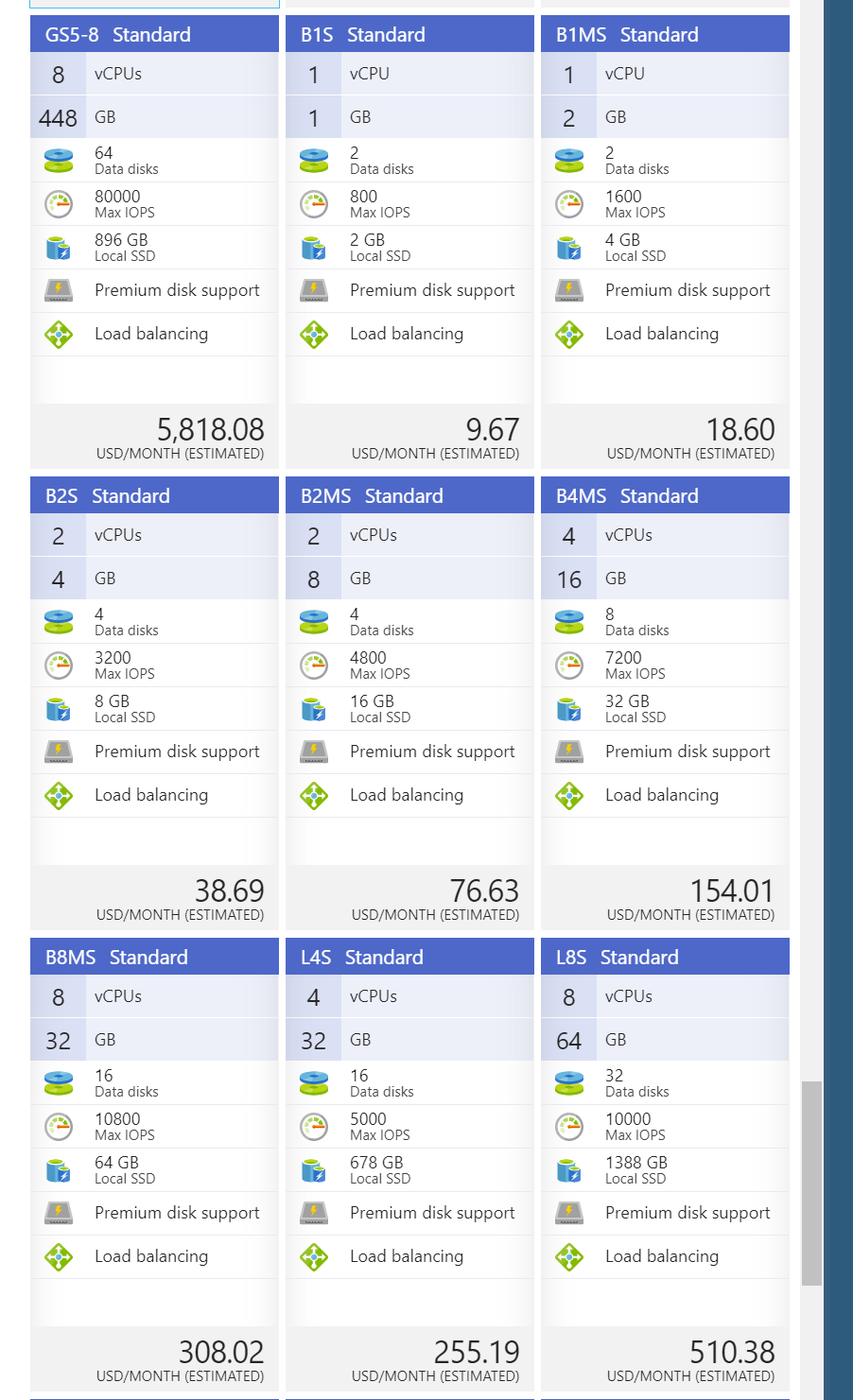 Once setup your VM will start to either bank or consume CPU credits. You can see these credits in the Azure Portal, and see how well your machines are trending. First, let’s see how a typical demo environment might look – here is a snapshot of a ConfigMgr server with about 6 clients (and remote SQL). As you can see, the CPU is normally low for a demo environment: 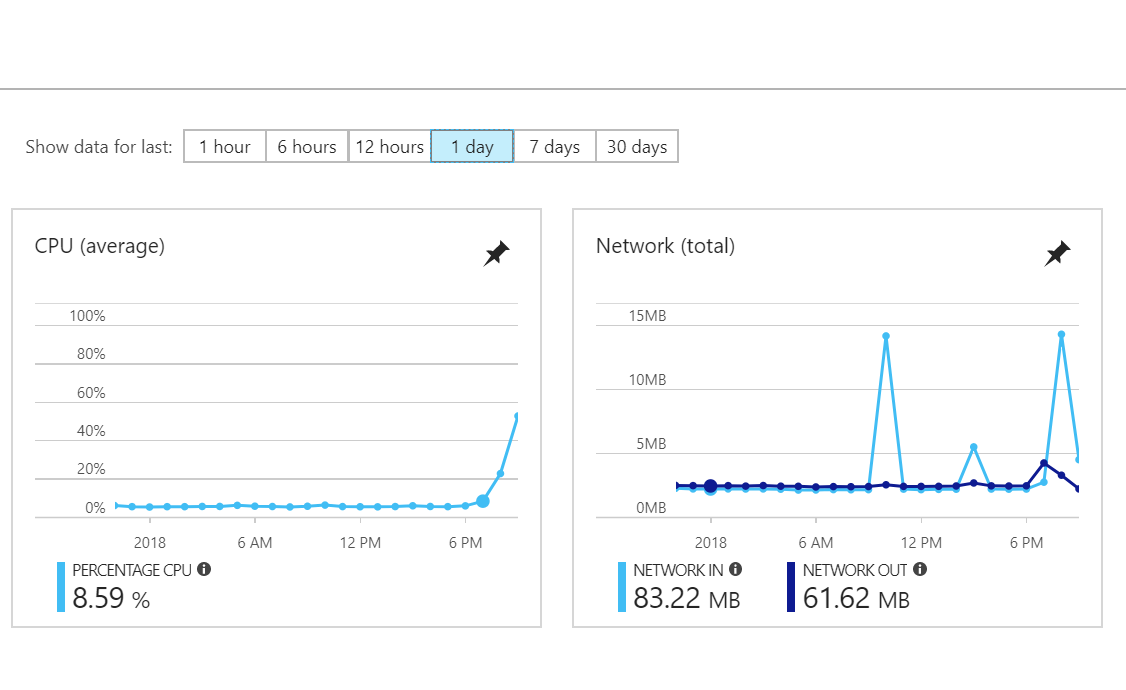 See that spike in the CPU consumption at the end of the graph? I started an update cycle, which is obviously going to consume some CPU as the updates are downloaded, processed, and made ready for deployment/installation. Let’s find out how my burstable credits are stacking up. To see how your machine is banking, click on “Metrics” under the “Monitoring” section.

There are two metrics we are concerned with – [Host] CPU Credits Consumed and [Host] CPU Credits Remaining. These show up how our credits are banking (or being consumed). Here is a snapshot of that same ConfigMgr box consuming those credits:

And the remaining credits:

To give you an idea – this is what the accumulation of those credits looked like: 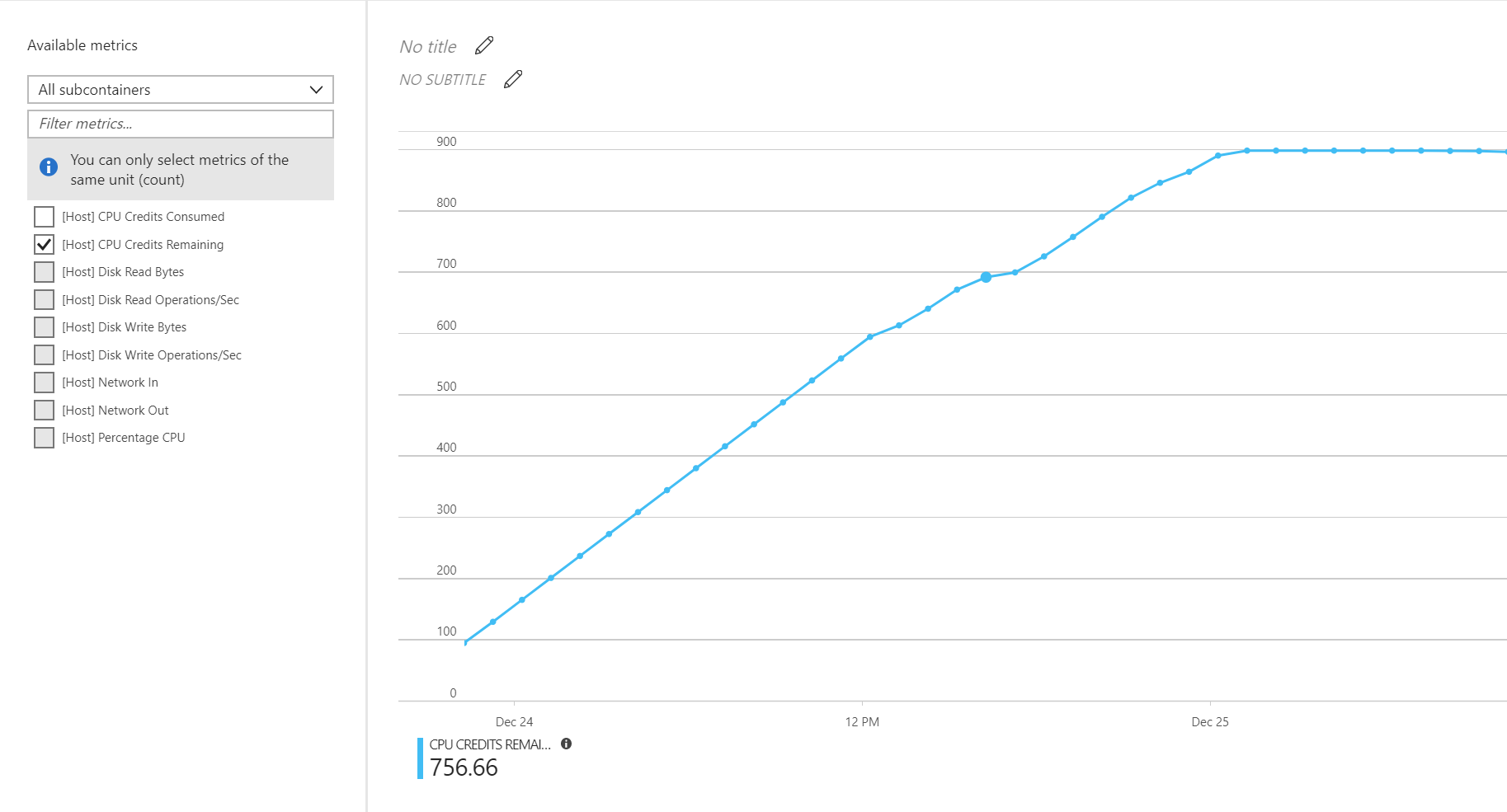 It doesn’t take long to max your credit bank, and you can keep those in your back pocket for when you really need them – doing presentations or prepping for presentations. Of course you can use the B-series for normal workloads, but these boxes make an excellent demo environment. No more worrying about my laptop handling the workload!